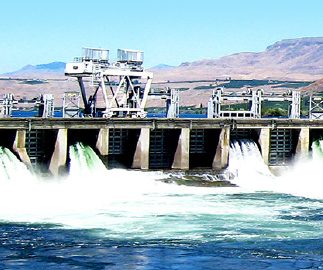 According to the World Energy Council, water supplied 71% of the world’s renewable energy in 2016. Hydropower stations generate electricity by capturing the energy from flowing water. That water may be flowing in a river or from a reservoir. It works like this:

There’s one more aspect to this that’s essential to proper operations. The water entering the turbine can’t be filled with trash. The EPA believes around 80 percent of the trash found on beaches came from the land. Much of it is food packaging and beverage cans and bottles. When that trash and recycling finds its way into rivers and into hydroelectric power stations, it can damage equipment and impede water flow.

Is That Much Trash Really in Our Waterways?

The amount of trash and debris in rivers is astounding. In 2010, the Great Mississippi River Cleanup began. In less than a decade, volunteers have already removed more than 513,000 pounds of trash and recycling from the river.

Each year, Riverkeeper Sweep volunteers clean up trash from the shores of the Hudson River in New York. In 2018, 38 tons of trash was removed.

Where does all this trash come from? Trash may fly out of a truck bed when it’s not secured. Some flies out of open car windows on a gusty day. It can be deliberately tossed out. People may not properly dispose of food packages after a picnic. Wind can blow it from recycling containers and dumpsters that are not closed. To prevent this from happening, consumers need to be careful about disposing items and reusing packaging as much as possible.

You also have the debris that naturally ends up in waterways. An old tree on the bank of a river may fall in after a storm. Branches may snap off trees after an ice storm and end up in a river. Leaves that fall off the trees in the fall will end up in some of the nation’s rivers. That debris is biodegradable, but it can clog the screens on water intake pipes at hydroelectric plants and cause problems.

How Do Hydroelectric Plants Keep the Trash Out?

There are two components to trash and debris removal at a hydropower station. Trash or bar racks are metal screens placed over a water intake pipe. These metal grids prevent things like fallen branches, trash, and recyclable containers from going into the pipe connected to a turbine.

Those screens need to be cleared from time to time. That’s the job of a hydropower trash rake. The rake removes the debris and trash from the screen automatically. This keeps the screen clear so that operations are not impeded.

If the screen is not cleaned, air bubbles can get in and damage the turbine. Low water pressure is all it takes for the air bubbles to form It could be from a blocked screen or low water levels in a river or reservoir. To prevent pockmarks in the turbine blades and the vibrations that can come with it, the plant must shut down and wait until water flow is corrected. This can cause power outages for people served by that plant.

Hydropower trash rakes can work quickly. Catronic Series Trash Rakes clear a 200-foot section at depths of up to 100 feet. The ability to lift up to 20 tons makes it a powerful system for removing fallen trees from trash racks. The hydropower trash rake can work automatically or with someone operating the system and manually removing logs, trash, and other forms of debris.

What does your hydroelectric power station need to keep equipment in prime condition and working efficiently? The professionals at Lakeside Equipment Corporation can help you find the perfect solution. Call 630-837-5640 or email sales@lakeside-equipment.com for more information.

How Water Treatment Solutions Are Keeping The Planet Greener

When the Clean Water Act took effect in 1972, regulations came into play that kept untreated wastewater out of streams, rivers, lakes, seas, and oceans. Why was this necessary? Prior to the act, some rivers in the U.S. were so polluted that they were deemed unsafe for recreational activities like swimming or fishing.

Contaminated water led to toxins in the fish people ate. That’s why there are limits on how much seafood you can safely consume today. Plus, it was changing the water sources. Harmful bacteria and algae thrive in some polluted bodies of water.

Today, wastewater treatment plants must hold Clean Water Act permits. Before any wastewater returns to a body of water, it must be cleaned. This includes water that goes into a city’s storm drains, water from sewers, and water that’s trucked in by companies that pump out residential septic tanks.

A Brief Look at the Clean Water Act

While the Clean Water Act wasn’t enacted until 1972, it actually dates back to the 1940s. The Federal Water Pollution Control Act put standards in place to help improve the quality of water sources like rivers, lakes, and oceans. It was completely revised and renamed in 1972 and became officially known as the Clean Water Act.

The basis of that act was to make it illegal to discharge any wastewater from a “point source” (container, drainage ditch, pipe, tunnel, etc.) into a water source without a permit. This included manufacturers, waste treatment plants, cities, and towns.

The National Pollutant Discharge Elimination System (NPDES) permit goes to companies who have the technology and procedures in place to limit bacteria and other pollutants from water that is discharged. To ensure companies are following the guidelines, random samples are taken from time to time and tested. These permits last five years.

Businesses and industries that hold an NPDES permit have 126 pollutants that must be monitored. Of that number, 65 of them are considered “priority” pollutants. These pollutants could be issues to humans or to the plants and creatures living in the many bodies of water throughout the U.S. Here’s an example of some of the priority toxins:

How Is Wastewater Cleaned?

Many decades ago, mixing raw sewage into a water source was an effective way to purify that wastewater. The bacteria and creatures in the water would eat the organic matter. As the population increased, there was too much waste for this process to be effective. That’s why water treatment plants developed.

The first stage in a water treatment process involves separating large items like paper, sticks, and plastic items from the liquid. Screens capture the larger items and allow the remaining wastewater through to the next stage. Trash rakes remove those items from the screens to prevent clogs. Wastewater goes into a grit removal system to separate the smaller particles like sand and small stones and aerate the remaining wastewater.

After grit is removed, the wastewater goes to a sedimentation tank to help further remove sediment. It goes through a filter and is aerated more with waste falling to the bottom and the aerated water going out through the effluent pipe. Eventually, chlorine is added to kill any remaining bacteria. Depending on state laws, the chlorine may need to be removed prior to going back into a water source.

For 90 years, Lakeside Equipment Corporation has specialized in water purification systems. The companies original goal was to ensure people had safe drinking water in their cities and towns. Since then, expansion has led to water and wastewater treatment solutions in all of North America and many other countries around the globe. What are your water treatment goals? Call us at 630-837-5640 to talk to a specialist about water treatment solutions that fit your budget and needs.